On Earth, man lives from birth under the conditions of terrestrial gravity. The cessation of this essential environmental factor effects changes in nearly all systems of man’s organism. Due to the functional burden of the musculature during space flights, a cell structure conditioned degeneration in the form of a decrease of the muscle mass, the muscle fibre profile, the realizable strength and even their endurance capability are affected. Most of these changes found during and after space flights are quite comparable with such adaptations that one finds on athletes and normal persons in phases of inactivity or immobilization. This fact turns up quite interesting awareness of space flight physiology and even for many other medical categories, for example preventive and rehabilitative medicine, intensive medicine, geriatric medicine and up to sport medicine. Space flight medicine enables a unique way of investigating degradation speeds and the degree of catabolic processes of muscular and bone substance, as well as the cardiovascular performance decline and functional changes in nearly complete body weight relief, and to develop strategies to work against these de-adaptive changes.

The dynamometer „MOTOMIR“, developed within the framework of the Austrian-Russian “AUSTROMIR-91” project, was used to document for the first time a degradation of muscle strength at different periods during a long-term flight within the “MYO-MOTOSCAN” experiment. Conclusions about the efficiency of training provisions executed onboard the MIR space station could therewith be achieved. This is therefore especially important because a decrease of capability increases the risk that complex tasks of a space mission are not carried out as required and could jeopardize the life of other team members.

A question was raised at the beginning of the space age: whether a manned space flight is at all possible. So today a question is raised: what should be done in order for spacemen to return back to Earth healthy and capable again after a long-term sojourn? In this regard, the following four research targets arose for the MYO-MOTOSCAN project within the RLF project:

The MOTOMIR dynamometer is a computer-controlled device operated by two electro motors. It enables the diagnosis and training of muscular strength in space. The speed is kept technically constant through selected movement amplitude (encoder) during concentric and eccentric tasks. The actors on which the cosmonaut exerts force with the feet or hands fixed in a defined pivotal angle (isometric) are also kept constant. The force exerted on the actors is recorded with the help of an extensive measurement film bridge and is forwarded synchronously with EMG data from the four muscles through the MONIMIR box for saving in DATAMIR. The device is electronically calibrated before each test, as well as executing gravitation adjustment.

The test assignments are supplied to the cosmonaut with the help of a laptop. The test cycle (12 programs) including strain and recovery times is kept constant before, during and after the flight in order to enable comparability.

The weight of the MOTOMIR flight model including saddle, manufactured from titanium, was 47.2 kg, having dimensions of 1210 mm x 626 mm x 470 mm. The movement amplitude of the actors was a maximum of 450 mm, the actors’ speed could be chosen from within a range of 0 and 600 mm/sec. Motor: brushless DC motor designed for onboard electric supply of 23-25 Volts.

Shared equipments of the Austrian payload

Results of 8 cosmonauts (2 Main Team 10 and 11, and 6 Main Team 15-16 = RLF) were won before, during (at various periods up to 14 investigations), and 4 and 6 days after the flight of long-term missions. These results were evaluated with special analysis software (NOVA AEROSPACE).

Synopsis of the results: 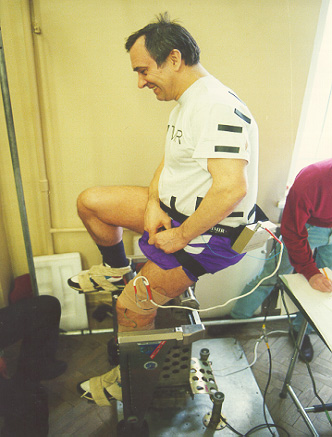 The equipment MOTOMIR consisted of the following units

Ergometer MOTOMIR including the Equipement and reserve parts